Take on the challenge and cycle from London to Paris – two of the most iconic capital cities in the world. On your final day (Sunday 23rd July) enjoy watching the Tour de France – join the crowds as the peloton arrives on the Champs-Élysées. 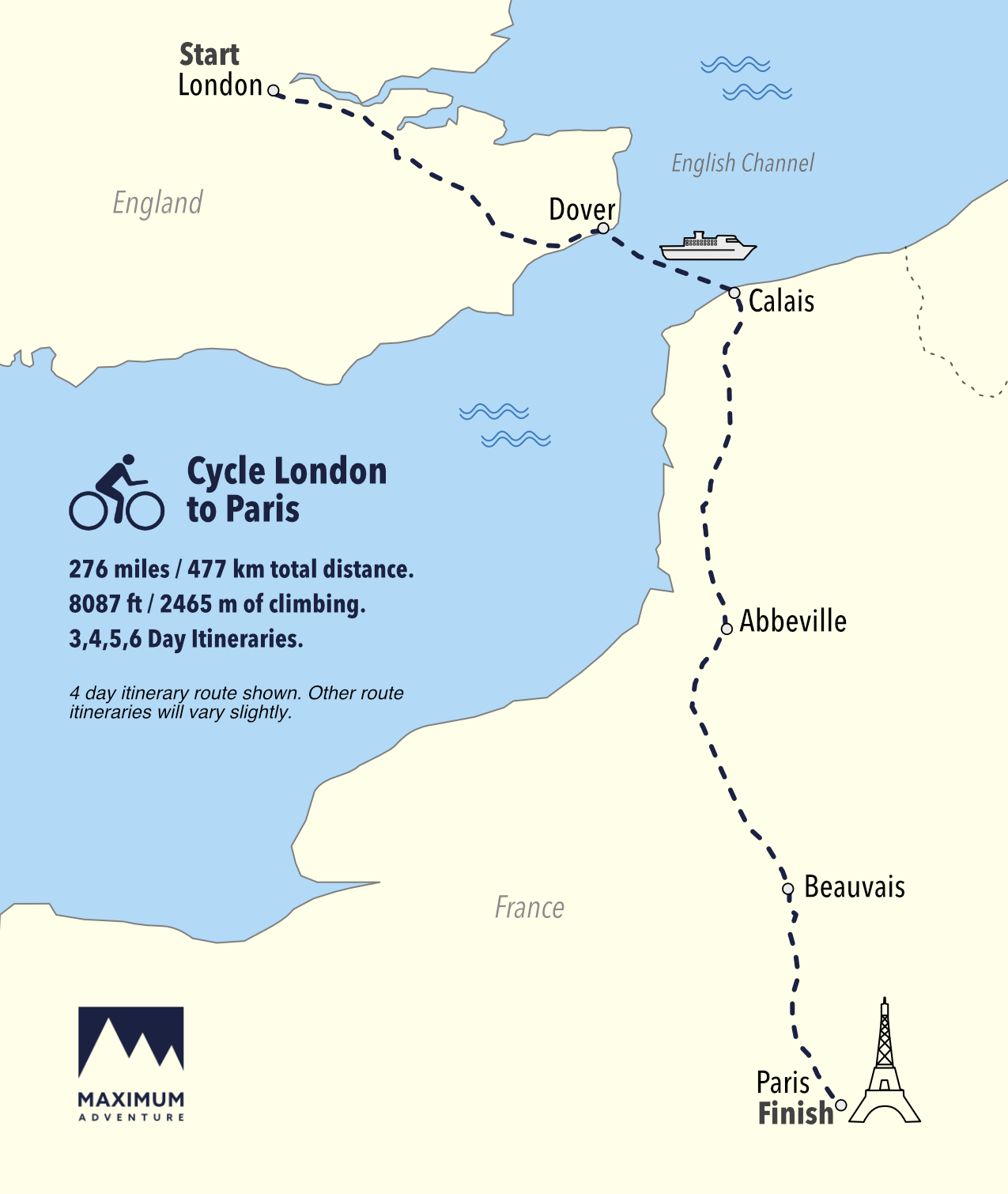 This trip takes you between two most iconic capital cities in the world, and between two of the most famous points: Greenwich Observatory in London, and the Eiffel Tower in Paris. The going is not as flat as many people think, but you do pass through classic countryside in Kent, and the Pas de Calais, Somme and Oise regions of France.

The road parts are done under your own pedal-power. The wet part goes via the most famous channel crossing: Dover to Calais. On your day in Paris, you could always round it off with a visit to Notre Dame. On a bike you feel the wind in your face, and get a real chance to explore some beautiful corners of England and France on the way. Once out of London, you pass through one of the harder sections of the route, as you go through Kent and the North Downs. The countryside is verdant, and remarkably much as it was in past centuries. From Calais you head inland and south. History will surround you on this ride – a stark reminder of the importance of these lands and of the wars that have been fought there. You’ll pass by battlefields from the Hundred Years’ War, see First World War cemeteries, You’ll also pass the spectacular Gothic cathedrals of Abbeville and Beauvais, with their extraordinary white limestone construction, full of tracery and flying buttresses.

You’ll stay one night each in Dover, Abbeville, Beauvais, and Paris. In Paris, if you want you can take time to soak up the atmosphere of one of the most romantic cities in the world: its restaurants, cafés, museums, and nightlife.

We run the London 2 Paris Cycle as an open or bespoke event. Our open events run Wednesday to Sunday, fortnightly from April to October (in June and July we run open events weekly). For bookings of 10 people or more, we also run this as an exclusive event on the dates of your choosing.

To book any number of participants on to an event, simply select the date in the calendar and follow the booking procedure.  You will then receive an automated confirmation and full details will follow from our office in due course.

We normally run this London to Paris Cycle over 4 nights, 5 days (4 cycling days), Wednesday to Sunday, however, if you would like to do this at any other time, then please contact us.

This itinerary is a guide only. It can be subject to change dependent upon viability, course members’ fitness, weather conditions, accommodation availability, or for any other reason the guide may deem necessary. All timings and mileages are approximate and for guidance purpose only.

How to take part for Charity

To do this challenge for a charity there is a non-refundable registration fee, payable to Maximum Adventure at the time of booking.  You can then choose between the two different options below.

Pay a registration fee at the time of booking then the balance due 10 weeks before departure.  With the self-funding option, you personally cover the full cost of the challenge.  This option means that there is no minimum sponsorship target due, but we encourage you to raise as much money as you can for the charity.

Pay a registration fee at the time of booking and confirm with your charity their minimum fundraising requirements for the balance.  This will typically be double the cost of the adventure, less the registration fee.  With the minimum sponsorship pledge option, you must submit 80% of your fundraising target to the charity 10 weeks before the departure date.

For more details of how fundraising works please read our step by step guide here or contact us for help.

Maximum Adventure work with lots of charities to offer our events as fundraising opportunities.  You can find our Charity Events from the ‘Menu’ in the corner of your screen or from our homepage.  If your chosen charity is not listed, please contact us and we will be happy to approach them on your behalf.

Why book with us

We know you have a choice of companies providing trips for your next adventures. Here are some of the reasons you should choose to travel with Maximum Adventure:

Great team of staff to support you