The West Highland Way is a classic long-distance walk, taking in beautiful landscapes and offering plenty of opportunities to witness some amazing wildlife. With a little know-how, and a pair of binoculars, you will be rewarded with some fantastic sights.

What does the West Highland Way involve?

The West Highland Way is Scotland’s first and most popular long-distance walk – 96 miles (154 km) long, from Milngavie (north Glasgow) to the base of Ben Nevis in Fort William. The terrain is varied, with a total ascent of 4,312m and the whole route is usually completed within 6-9 days. Despite around 35,000 people walking this route annually, there are many isolated areas where you will be sure to immerse yourself in nature and encounter some beautiful Scottish wildlife. 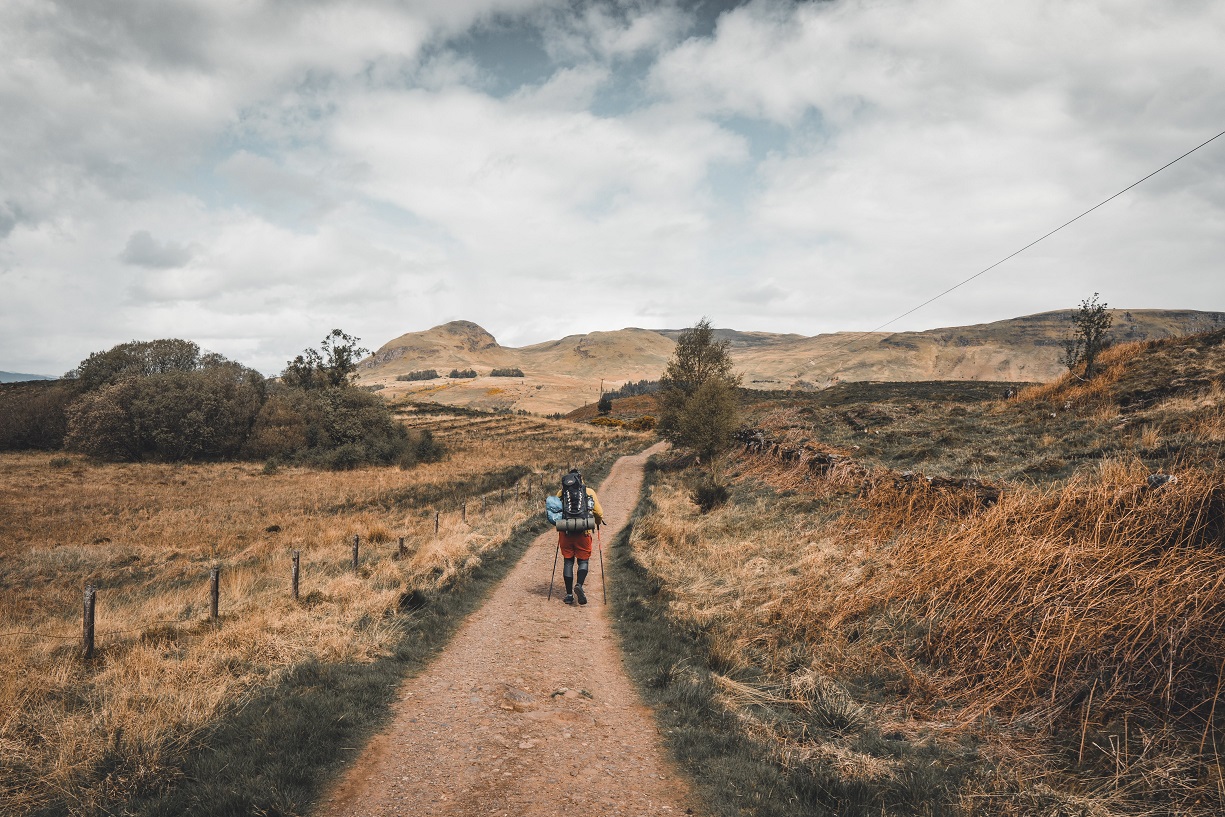 The habitats are varied along the West Highland Way, supporting a range of fauna and flora. The path crosses forests, woodland, lochs, rivers, waterfalls, moorland, and hillsides. It also crosses the RSPB nature reserve at Inversnaid and a Site of Special Scientific Interest (SSSI) between the Bridge of Orchy to Kinlochleven.

The weather on the West Highland Way can be very changeable, with strong winds in exposed areas and a lot of rainfall throughout the year – in fact, Fort William receives one of the highest rates of rainfall in the UK! Snow is present along the route during winter and early spring and some mountain peaks are covered in snow for ~100 days a year. Average temperatures in summer are a comfortable 18°C.

Deer are a common sight on the West Highland Way.  Roe Deer are the UK’s smallest deer species and can be seen grazing in woodland, while the Red Deer is the UK’s largest deer species (and largest mammal) and prefers grazing in open areas. In many areas, deer are becoming accustomed to human presence and will come quite close to you! 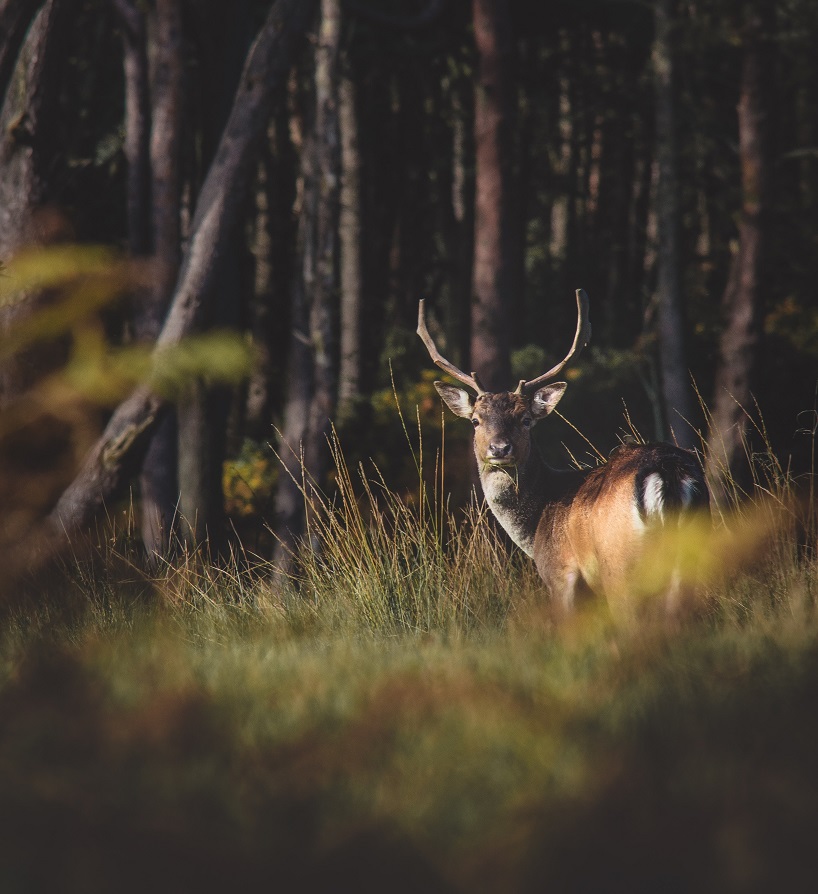 Although not a wild animal, you could see some Scottish Highland Cattle on your travels. These distinctive bovines, with their long, red hair and large horns are a symbol of Scotland. Feral goats could also be spotted along the beaches of the lochs.

Bats are a frequent sight at dawn and dusk, especially near water. You won’t be able to distinguish species without the use of a bat detector, which picks up their high-pitched calls, but the most common species and the one you are most likely to see is the Soprano Pipistrelle.

Since you are passing rivers and lochs, you may have a chance to see an otter. They are frequently seen around the Loch Lomond area in the early morning and evening so keep an eye out when you are passing!

Pine Martens are present but they are elusive and scarce. They are found in the pine forests mainly and were previously hunted almost to extinction in the UK but they have survived in Scotland. Your best chances of spotting a pine marten are in summer, early in the morning or late at night, because they are nocturnal. Glenloy Lodge at Fort William is frequently visited by Pine Martens.

Red Squirrel could be spotted in any woodland areas but they are not as common a sight as they previously were, no thanks to the invasive grey squirrel.

You will come across a range of different woodland species including Redstarts, Chiffchaffs and Willow Warblers, hearing their beautiful songs as you walk through the forest.

If you’re more interested in birds of prey though, you won’t be disappointed. Look out for Osprey catching fish between Balmaha and Rowardennan – a favoured spot for them to feed. With a keen eye and a pair of binoculars, Golden Eagles can sometimes be seen, but more commonly Buzzards and Peregrine Falcons are spotted. 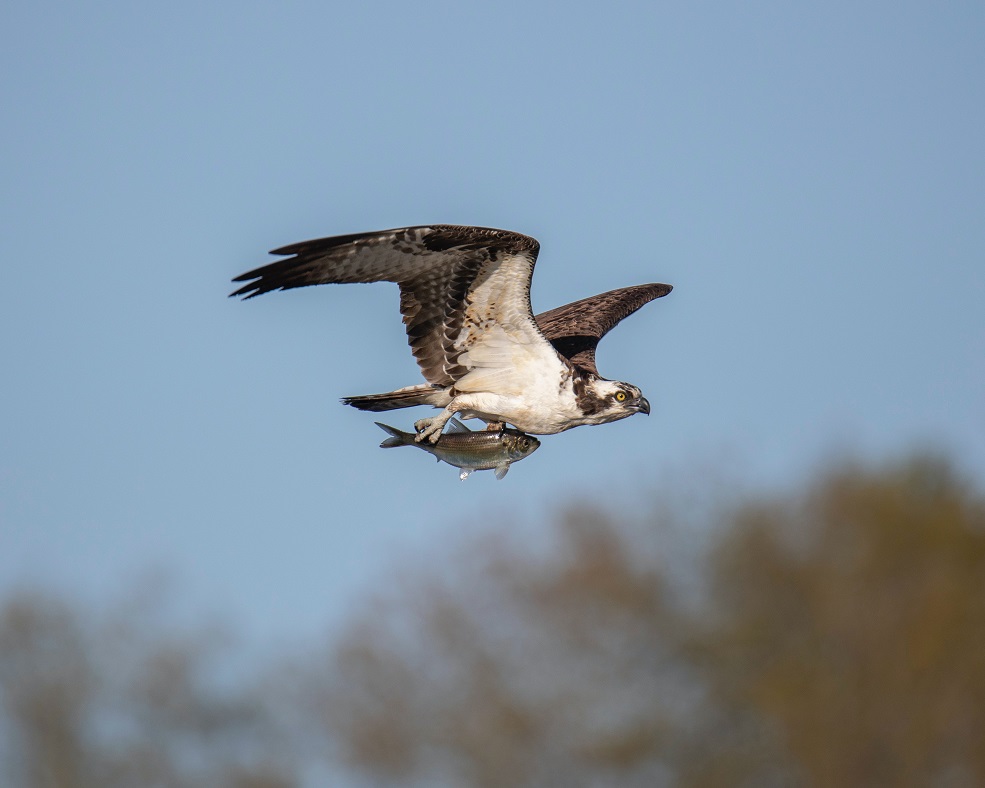 Red Grouse (the species adorning the label of The Famous Grouse whiskey) can be seen in the heather and moorland along the route too.

Who doesn’t love the smell of pine trees when they walk through a forest? The West Highland Way has plenty of woodland and forest cover, enabling you to get your fix. The Scots Pine is our only native pine tree and is found in abundance in Scotland. It provides a very important habitat for endangered species such as Red Squirrel, Pine Marten, Scottish Wildcat, Capercaillie and the Scottish Crossbill. 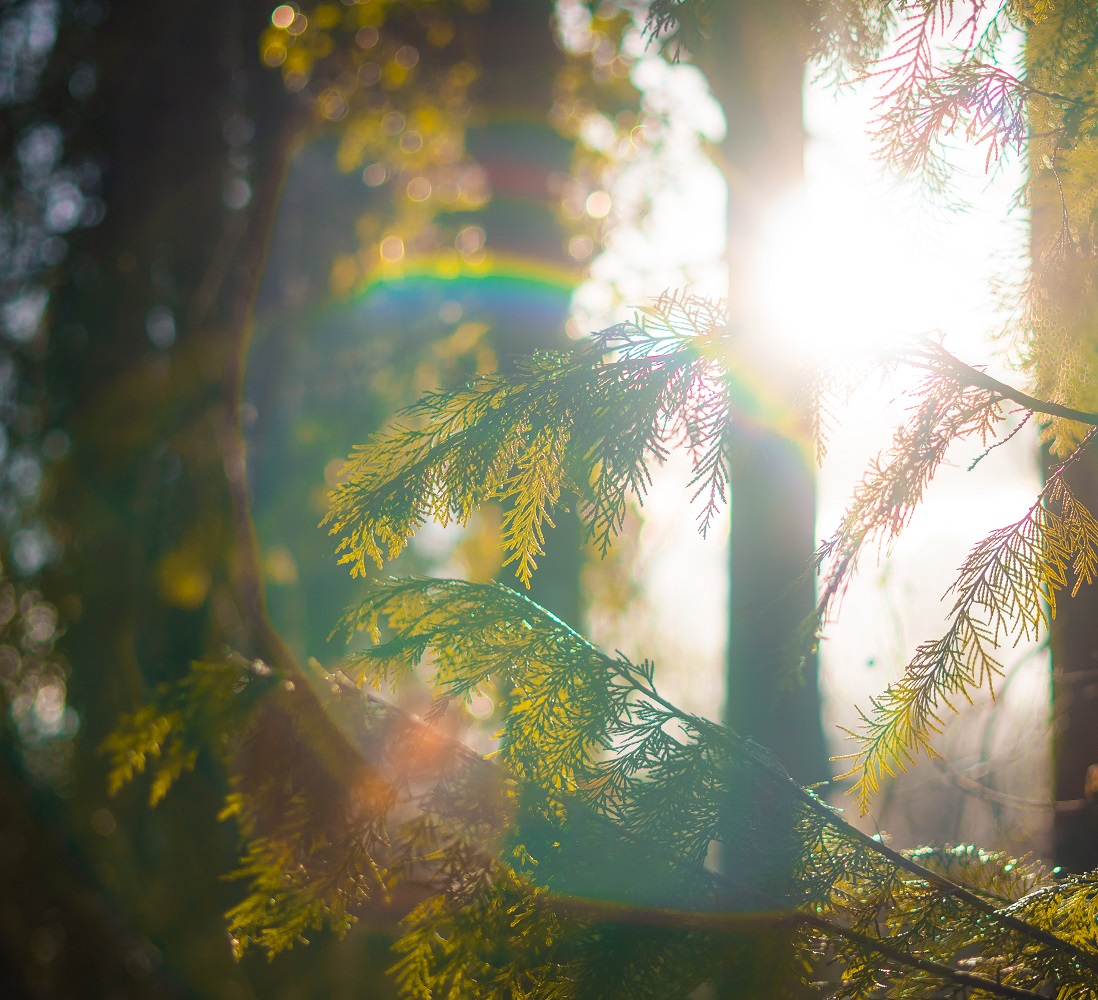 You will see an abundance of wildflowers along your walk, adding colour to the landscape. Bluebells will cover woodland ground in spring, purple heather covers hillsides in summer – all providing a valuable food source for bees.

Fungal species often get overlooked but they are actually intriguing and play a vital role in the ecosystem by breaking down dead plant and animal matter. The best time to look for fungi is in late summer and autumn, particularly in forests and woodlands. You could find a Jelly Ear growing on a rotting tree, a Common Puffball, a Turkey Tail (which actually does look like a turkey’s tail!) or the classic fairy tale red mushroom with white spots – the Fly Agaric! 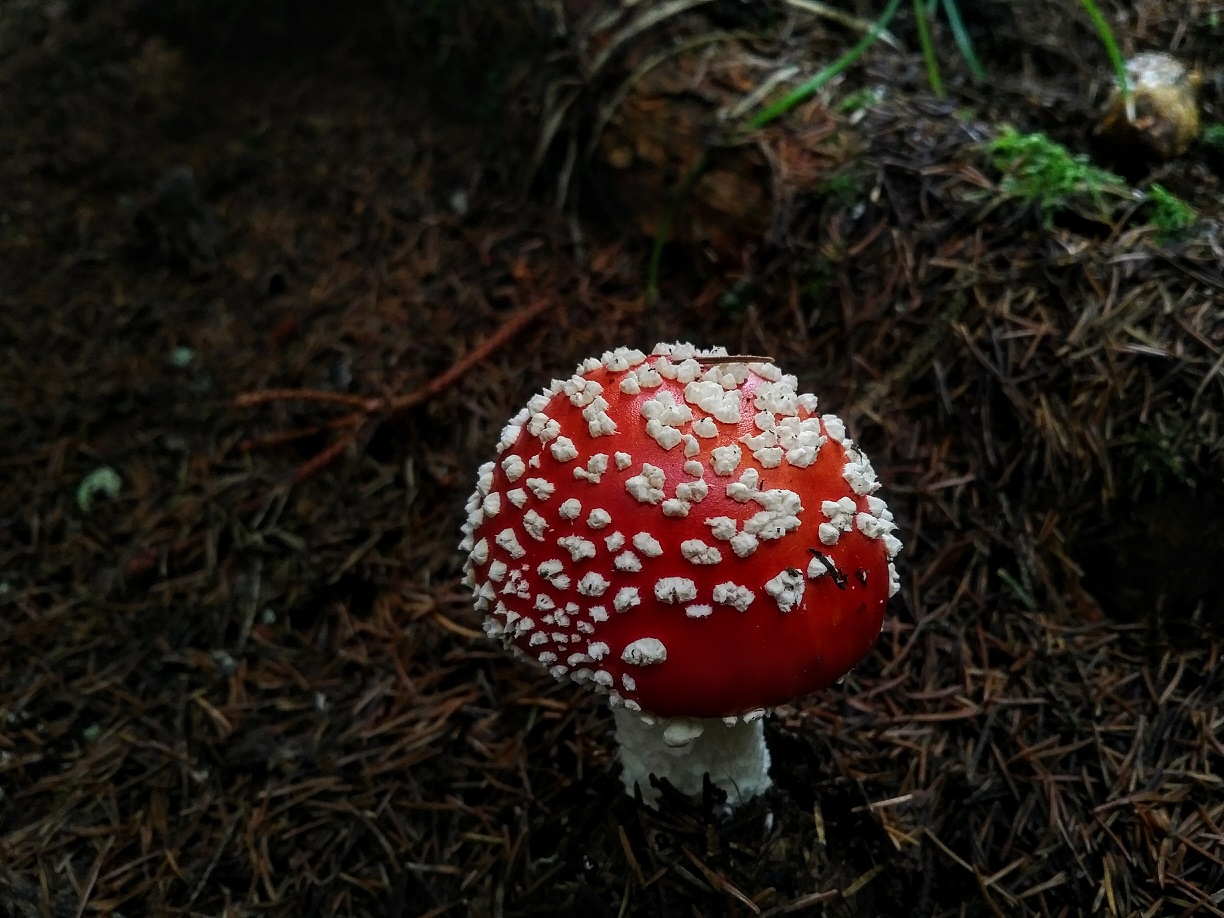 One of the main threats to wildlife on the West Highland Way is habitat loss and fragmentation due to development and intensive agriculture. This is being managed now with designated protected sites (the Scottish Wildlife Trust now owns 120 reserves). Other threats include pesticides and pollution from farming and urban areas affect uplands, grasslands, and freshwater along the West Highland Way.

As much as we love to see deer, we should also recognise that they have become a problem as they no longer have any natural predators present to keep their population in check. They overgraze native tree saplings and have drastically changed the landscape, with many areas having to be fenced off in order to allow trees to grow.

A further threat is wildlife crime which can include badger baiting, misuse of traps and snares, disturbance of protected species, and egg collecting. If you witness anything suspicious you should report it to the police. You can also help by keeping quiet and enjoying any wildlife you see from a distance.

Ready for some unforgettable sights?

If you want to see some Scottish Wildlife on the West Highland Way, book a trip with us! We will arrange everything so you can enjoy the challenge without the stress. If you want to learn more about what is involved and how to prepare yourself, have a read of this article.

The best sights along the Jurassic Coast