Hadrian’s Wall was constructed in 122 AD, and today stands as the largest intact Roman artefact in Britain. The site is a UNESCO World Heritage Site and a British cultural icon.

In this Maximum Adventure article, we’ll explain what the Hadrian’s Wall walk is. We’ll then take a look at some key historical facts and sites associated with this walk.

Time travellers…it’s time to go back to the Roman dynasty. 🕔🚀🕤

What is the Hadrian’s Wall walk?

The Hadrian’s Wall walk is a long-distance footpath that links the north- west of England and the north-east. The walk spans 84 miles starting at Bowness-on-Solway on the west coast and finishing at Wallsend in the east.

The route follows the magnificent wall built by a Roman emperor named Hadrian in 122 AD. The stone wall base remains with remnants of forts every five miles, a military road, defensive ditches and milecastles. As such, the Hadrian’s Wall walk gives you a sense of what it would have been like for the Roman Legionnaires stationed at this far-flung corner of the Roman Empire.

Walkers are fond of hiking the length of Hadrian’s Wall to experience the route’s unique historical Roman features. As such, the Hadrian’s Wall path was declared a National Trail in 2003. Yet, the Hadrian’s Wall route has been around for centuries. The first person in modern times to walk the wall’s length was poet and historian William Hutton. Hutton produced an account of his journey in his book The History of the Roman Wall – published in 1802.

The trail is well signposted due to being a popular attraction for tourists in Northern England. Yet, the Hadrian’s Wall path still manages to retain a quiet sense of wilderness.

The Hadrian’s Wall path provides a fine coast-to-coast walk. The path incorporates a diverse expanse of different landscapes, from urban to riverside walking, to the gentle pastures of Cumbria, and the Solway estuary with its salt marshes. The route also incorporates some dramatic upland sections that continue along the wild escarpments of Whin Sill.

The path runs through the towns and villages of Bowness-on-Solway, Carlisle, Banks, Once Brewed, Brocolita, East Wallhouses, and Newburn – to name a few. The route then finishes at Walls End.

If you book your Hadrian’s Wall walk with Maximum Adventure, we’ll take care of the accommodation and logistics for you. You can book to complete the walk in 6 days, 7 days, 8 days or 9 days.

The time frame chosen will determine where you’ll end up stopping on the route. You can even choose to complete the route as a walk-cycle combination, or opt to simply walk the route’s highlights.

If you’re up for a mega challenge, why not signup for Maximum Adventure’s Hadrian’s Wall marathon?

To help you visualise the Hadrian’s Wall Path, we’ve detailed the route on the map below. It’s better to start the route from the west coast, at Bowness-on-Solway, and finish on the east coast at Walls End. Doing so means you’ll walk with the wind on your back.

The Hadrian’s Wall walk is a route that’s steeped in Roman history. For one, you’re travelling the line of a wall built in 122 AD. As such, the wall stands as the largest Roman archaeological feature in Britain, one that’s regarded to be a British cultural icon and a UNESCO World Heritage Site.

When walking the length of Hadrian’s Wall, you’ll pass Roman forts, roads and excavation sites, making this route popular among historians. With this in mind, below we’ve detailed the key historical moments associated with Hadrian’s Wall.

Hadrian’s Wall was built as a defensive structure

The Roman emperor, Hadrian, built his wall as a defensive fortification for the Roman province in Britannia. The wall marked the boundary between Roman Britannia and unconquered Caledonia to the north.

On the emperor’s accession to the Imperial throne in 117 AD, there was unrest and a rebellion in Roman Britain. These troubles are thought to have influenced Hadrian’s plan to construct the wall, to focus on defending Roman’s current borders as opposed to expanding the Roman empire.

The wall acted as a physical structure keeping barbarians out and the Roman empire in. Just as the wall provided a physical boundary, it also served as an observation point to alert Romans of incoming attacks. Along the wall, there are pits or holes – known as cippi pits – which held small tree trunks entangled with sharpened branches (Roman “barbed-wire”) for defense.

The construction of Hadrian’s wall demanded a lot of time, money and resources

It comes with no surprise to learn that building a stone wall spanning 73 miles demands a lot of time, money and resources.

It took six years to build the wall, demanding input from 150,000 soldiers, plus some members of the Roman fleet. Many of the soldiers tasked with building the wall had little relevant knowledge and would have needed the training to become surveyors, engineers, masons and carpenters.

There’s evidence that once the wall was constructed, it was covered in plaster and had a whitewash. This meant the wall would have been visible for miles around.

Emperor Hadrian was commander of the Roman empire in 122 AD, and at that time the empire spanned 2,500 miles from northern Great Britain to modern-day Iraq, and 1,500 miles south of the Sahara Desert. Hadrian ruled until his death (from a heart attack) at the age of 62.

Historical sources describe Hadrian as the most versatile of the Roman emperors. Hadrian was battle-tested, a skilled politician who consolidated the Roman territory, a traveller who visited much of the Roman empire and a patron and lover of the arts. As such, Hadrian turned to architecture to legitimise his reign as opposed to conquering new land. As such, during Hadrian’s time, Roman peace was at its height.

Note that for many of the museums located along the walk, you’ll have to pre-book entry.

Segedunum, which translates to a strong fort, was built to guard the eastern end of the wall, and housed over 600 soldiers. The fort stood for over 300 years. 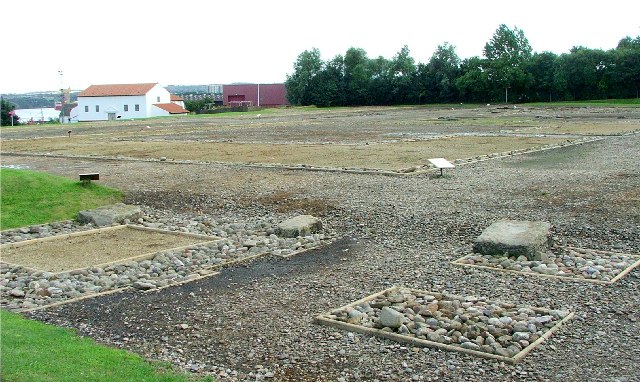 Today Segedunum is a large excavation site and holds the surviving foundations of many buildings and parts of the wall. There’s a large interactive museum to explore, with a full-scale reconstruction of the bathhouse and a section of the wall. You can also stand on top of a 35-meter viewing tower and look across the magnificent World Heritage Site. Segedunum is located near the Walls End in North Tyneside and is worth the visit as you finish the route.

Six miles from the market town of Hexham, nestled in the valley of Chollerford next to the North Tyne river, lies the Chester Roman Fort. This is a heritage site located on the Hadrian’s Wall line. 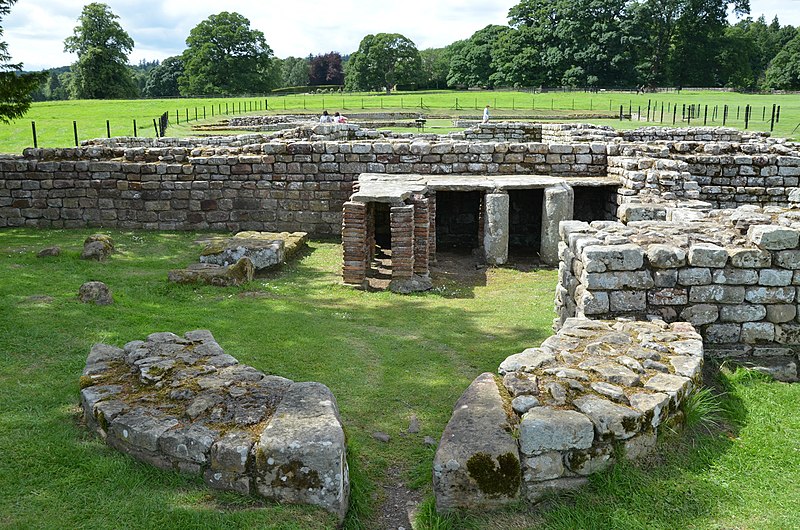 The Chester Roman Fort is the best-preserved Roman cavalry fort in Britain. Wander around the officer’s quarters and explore the well-preserved baths and steam room. The fort is thought to have housed 500 Roman troops for around 300 years.

The Housesteads Roman Fort is arguably the most significant Roman Fort on the Hadrian’s Wall walk. The ruins are excellently preserved, for instance, the wall remains up to 10 feet in height in some places. 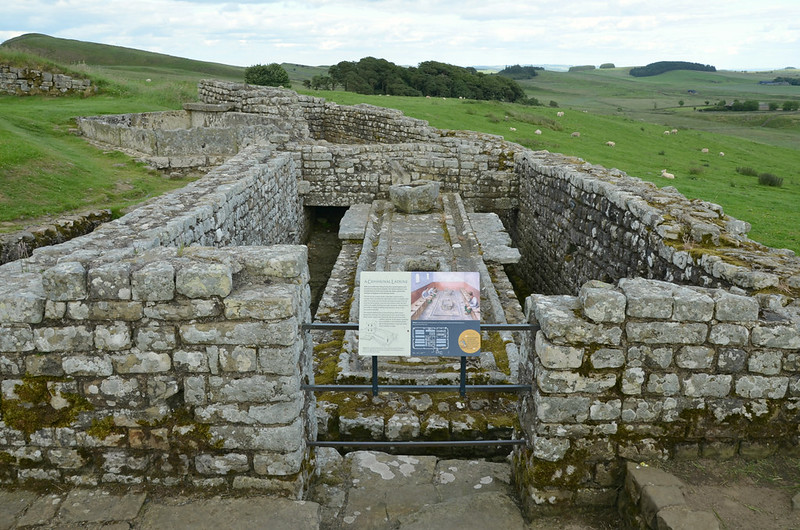 The Housesteads Roman fort was built around 122-32 AD. Today it’s possible to wander around the barracks, blocks, the hospital, and peer into the oldest toilets you’ll ever see. Plus there’s an interactive museum showing a reconstruction of this fort.

The ruins at Vindolanda aren’t as impressive as the ones at Housesteads, yet the artefacts excavated here are unique and tell a story of Roman past.

These include objects such as writing tablets (Roman postcards), cutlery, weapons and pottery. It’s certainly worth planning an extra day on route to visit this fort. This fort gives a glimpse of a Roman garrison town, with houses and reconstructed turrets and temples. 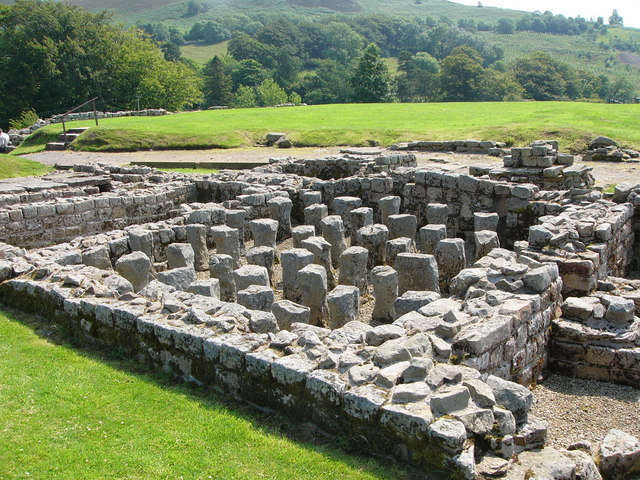 Carrawburgh Roman Fort at Brocolitia is another one of the 16 forts along Hadrian’s wall. Carrawburgh housed a garrison of approximately 500 soldiers charged with defending the Roman frontier. Carrawburgh Fort defended an area that spanned 1.4 hectares on a slightly raised natural terrace overlooking the Northumberland National Park. 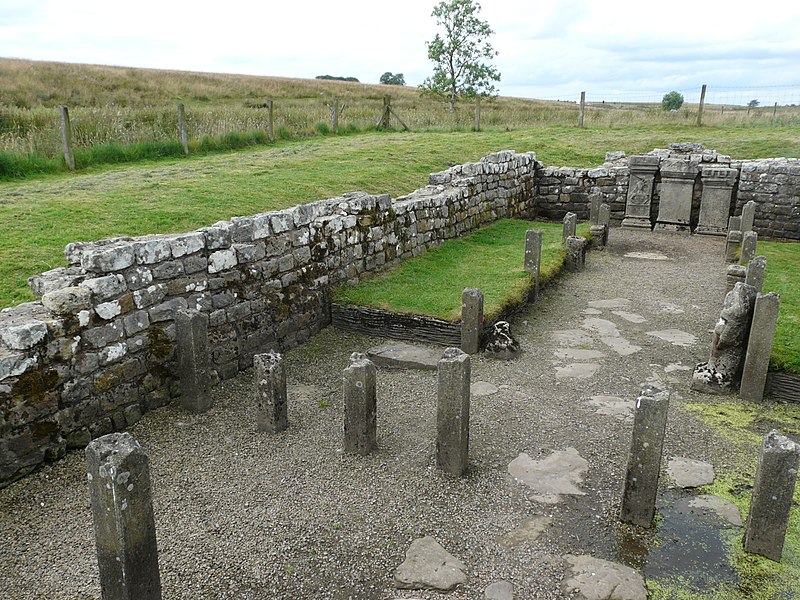 The Carrawburgh Fort sits between the Roman cavalry fort at Chesters and the infantry fortress at Housesteads. Nearby lies the fascinating temple dedicated to the Roman God Mithras. According to the legend, Mithras captured and killed a sacred bull in a cave, which Mithraic temples are intended to evoke.

The Sycamore gap was created thousands of years ago by a vast amount of meltwater flowing between two ice sheets that once covered the area. Today, a Sycamore tree grows in that gap and is named the Robin Hood Tree due to its feature in the 1991 Robin Hood: Prince of Thieves. 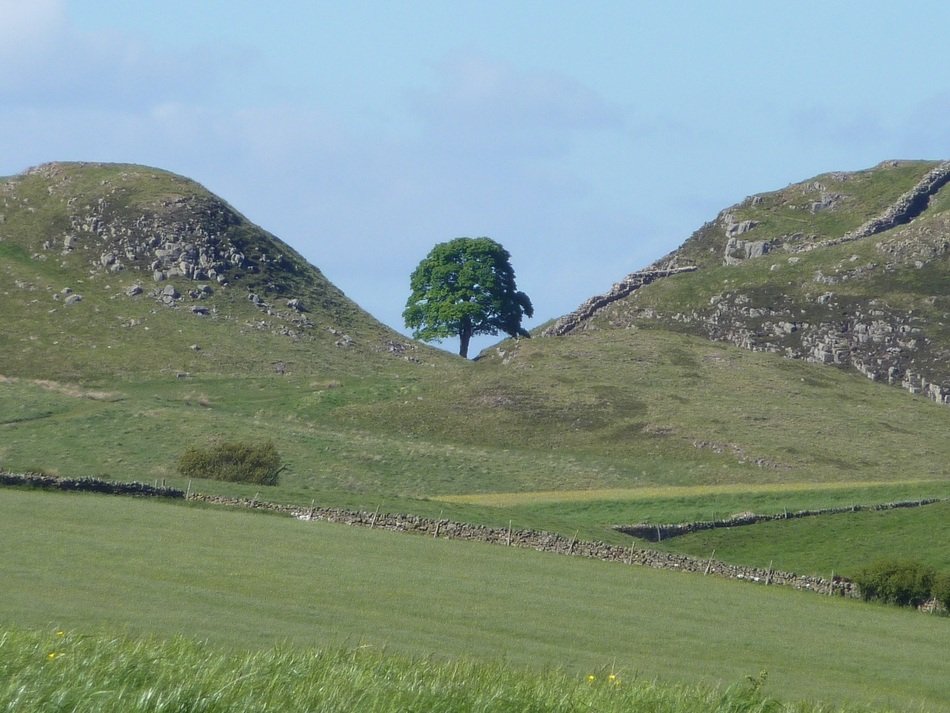 Today the sycamore tree must be the North East’s most photographed tree and is considered a national treasure. The tree is a few hundred years old, meaning it’s witnessed some history along Hadrian’s wall in its time.

If you’re looking to take on the Hadrian’s wall challenge, why not book your adventure with Maximum Adventure. You can choose from a range of challenge variations, which are detailed below:

When you book your Hadrian’s wall walk with Maximum Adventure we take control of the trip planning and preparation for you. We’ll book your accommodation in good quality B&B’s or hotels. We’ll arrange for your luggage to be transferred. We also provide you with a map and guidebook when you book onto our self-guided events. Because your safety is of paramount importance to us, you’ll receive 24-hour emergency assistance during your trip.

All you have to do is get some training in and look forward to the big day.

Travel back to the Roman era and book your Hadrian’s Wall walk adventure with us at Maximum adventure, and make memories that will last you a lifetime.

Do you have any questions about Hadrian’s Wall walk not covered in this article? Maybe you want to learn more about the history of the walk, or what the walk means to communities today? Whatever your question, our team are here to provide the answers. Please get in touch as we’d love to hear from you.

The Coast to Coast Walk: Learn About the Route and Its History

The Coast to Coast Walk: Learn About the Route and Its History
Back to top